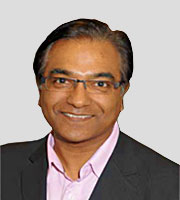 Atul trained in Medicine at Cambridge University and Kings College London; did postgraduate training at Imperial College, London (Hammersmith Hospital) and was Consultant Haematologist and Professor of Haematology at the Royal Free and University College Hospitals in London until his retirement in January 2019.

He ran the general laboratory haematology diagnostic service for many years at the Royal Free. His special interests in Haematology were Myeloma and molecular diagnostics.

He was the Founder and Director of the Lysosomal Storage Disorders Centre at the Royal Free, which grew to be the largest centre in the UK and one of the foremost clinical academic centres for LSDs in the world. He now works in private practice, charitable, educational and research roles, including consultancy.