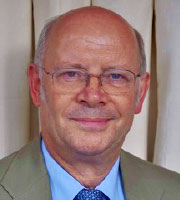 Adrian Newland is Professor of Haematology at Barts Health National Health Service (NHS) Trust, London, UK, where he was director of Pathology. He has a research interest in autoimmune haematology within the Medical School, where he is a former Head of the Division of Haematology, Oncology and Imaging.

Professor Newland is ex-Chair of the National Institute for Health and Care Excellence (NICE) Diagnostic Assessment Programme and co-chairs the WHO Strategic Advisory Group of Experts on In-Vitro Diagnostics (SAGE-IVD). He is Specialist Clinical Advisor in Pathology for NHS Improvement and Chair of the National Pathology Implementation and Optimisation Delivery Group. He chairs the Healthcare Forum for UKAS and has recently been appointed as a Non-Executive Director.